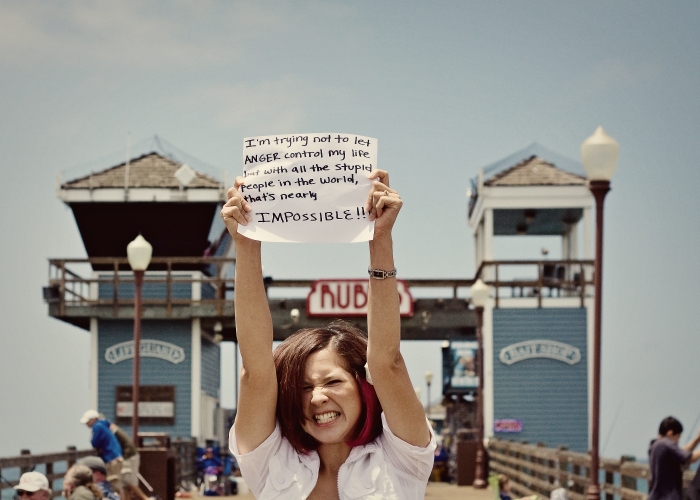 Maribel’s note made me laugh the second I read it…probably because I have said similar words myself about a thousand times. On top of having a cool note, Maribel was pretty much up for anything as far as where to shoot the images for it. Woo hoo! We decided to head out to find somewhere that people were gathering. Now, I am not saying I am perfectly sane or anything….far from it…..but if you want to see some weird people…..the beach is a sure fire place to find them. We started shooting…..Maribel is the woman of a thousand faces. Seriously, her session images need to be turned into a flip book.

But as funny as Maribel was, we didn’t really run into to anyone too strange….until….she attracted the attention of this guy…..

He stopped, mid-pier, leaned in, and read her note. He let out a big laugh, and loudly announced that he agreed with her. He walked on, but we decided that it was too good of an opportunity to pass up. We asked him if he would like to be in the image with her. You could almost see the wheels turning in his head as he worked through it….”Hey! Wait a minute! I get it. You want me to be the stupid person!”  What? Psssh…um…noooooooo. 🙂 His wife yelled, “DO IT!!”  🙂 He was an amazingly good sport, and agreed to pose with Maribel, and I promised, that someday, I would mention him when we are on Oprah.

His son wanted in on the action too….but wanted to be in it alone. He had no idea that his dad photobombed the shot…which makes it that much cooler.

Disclaimer: These images are in no way meant to associate anything I have written on behalf of NGW with Ruby’s diner. Or to imply that those working in or near Ruby’s diner are stupid. They may be, I have no idea, I have not met them all personally. The one waitress I saw leaving looked to be of average intelligence, or close to it….although the guy that made my shake one time was questionable. But the shake was delicious, so he had that going for him. Either way, the reoccurring appearance of the Ruby’s sign in these images is due only to the fact that they looked lame when photoshopped out.  So…to summarize….Ruby’s employees are probably not dumb, and their shakes are delicious. Thank you. Carry on.